The oil market not likely to stabilize soon

The oil price plunged into negative territory for this first time in history this week. On Monday, the price of the West Texas Intermediate (WTI) crude — the U.S. benchmark oil price — traded below $0 (dropping by up to -$40.32) per barrel before settling in the negative thirties.

The fall in prices across the board has been due to a combination of factors ranging from the slowdown in economic activity due to the Coronavirus pandemic and tensions between major oil producers - Saudi Arabia and Russia- which have caused demand shocks that even the largest oil production cut in OPEC’s history couldn’t solve.

With the negative prices, sellers holding U.S. crude contracts for May delivery had to pay buyers as much as $37 per barrel to take it off their hands. Following the collapse, futures prices for the global benchmark Brent Crude dropped, suggesting that oil markets are not likely to stabilize soon.

Though prices have since recovered, the oil market will remain volatile as long as lockdowns remain in place across the world to control the spread of the COVID-19. We are likely to see upward price trends when some economic activity resumes with phased-out approaches to ending the lockdowns that various governments are exploring. 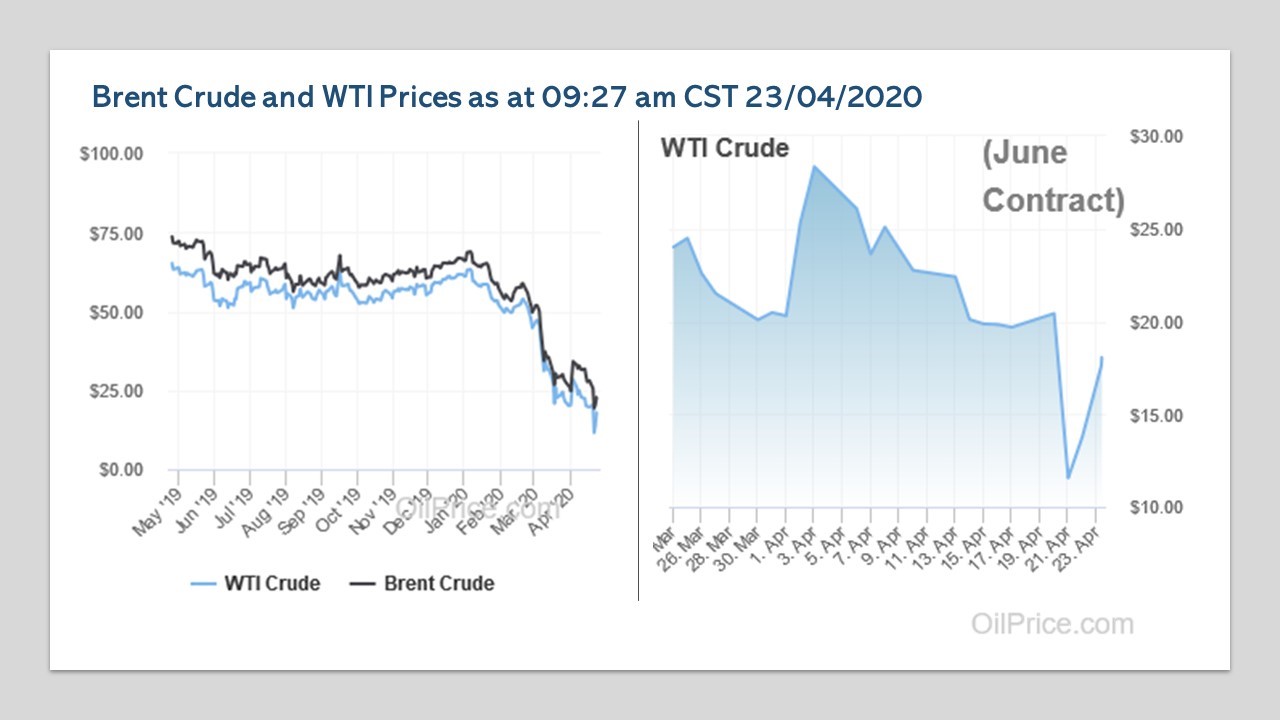 Global demand for fuel has dropped by up to 29 million barrels per day (about 33%), compared to about 100 million barrels a day when the global economy was operating at full capacity a year ago, and prices have lost over half their values.

The supply-demand curve has been on a downward trend since January. Here is a timeline of the fall in prices since January, according to Visual Capitalist. 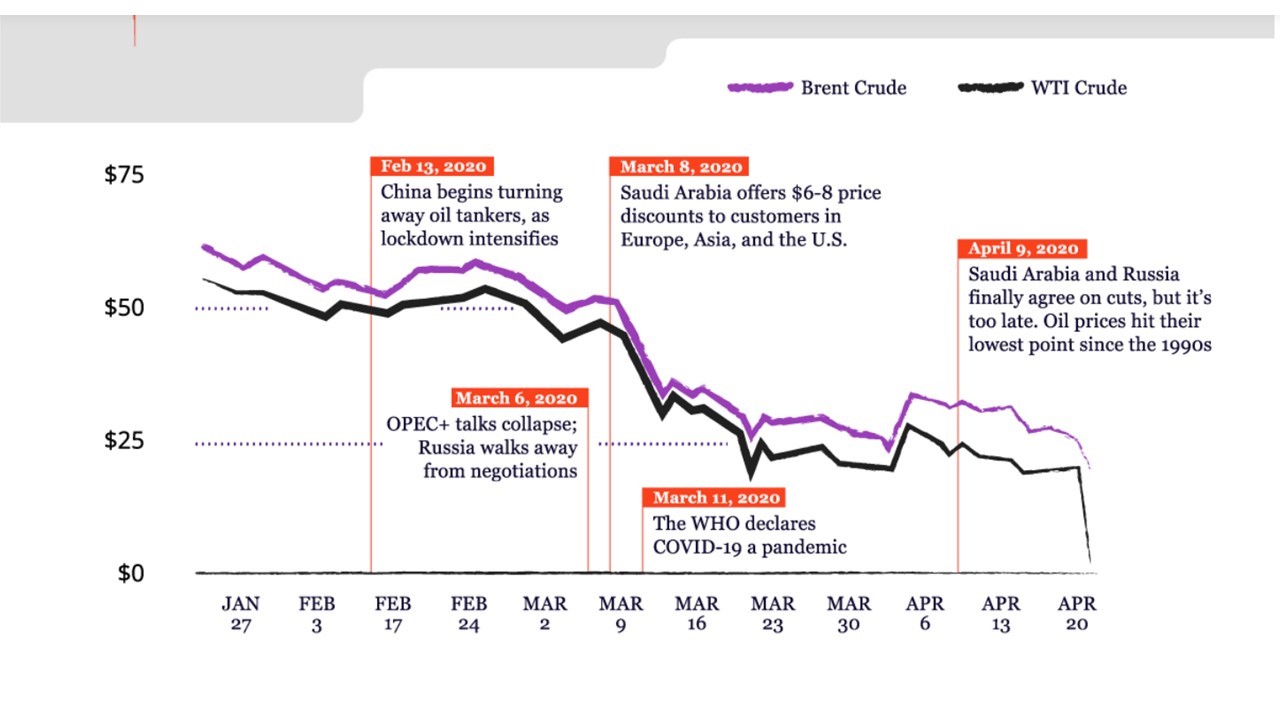 The price crash only affects the May delivery contracts and the contracts for June and beyond are trading normally. But they are still in a “contango” market structure: when the price of futures is higher than the current spot price. Contango usually occurs when an asset price is expected to rise over time. This results in an upward sloping forward curve. 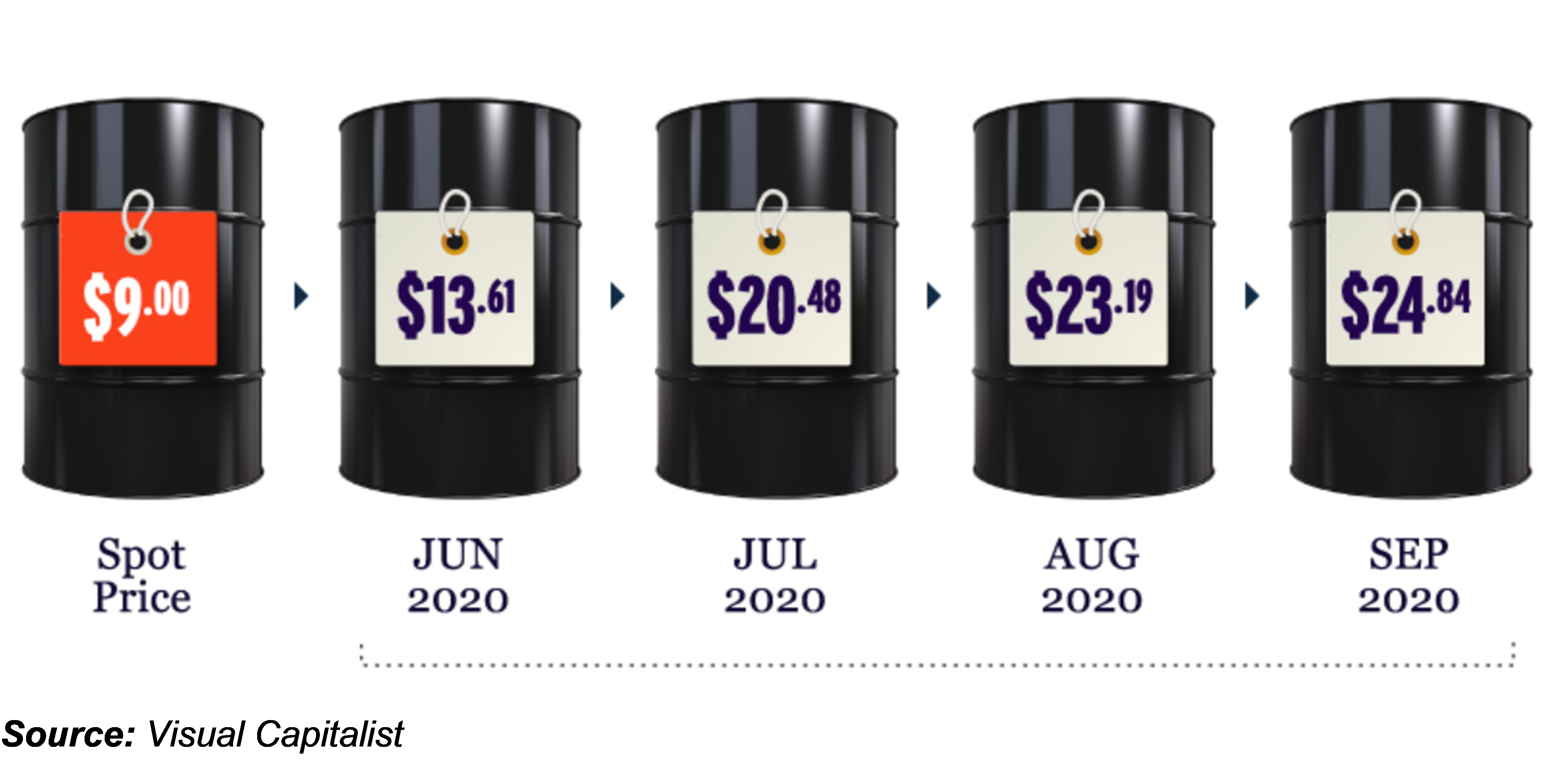 The Market is very oversupplied

As it stands, the market is very oversupplied. But what do you do when there is oversupply and oil is practically free? You store as much as you can and hope that you can sell it for more at some point.

But oil is a physical commodity and requires actual physical storage. As early as March, industry analysts had already forecasted the impending April oversupply and the effects that the market experienced. It was estimated that 76% of the world’s available oil storage capacity was already full.

Over 160 million barrels of oil are sitting on tankers at sea, with nowhere to offload. The cost of renting an oil supertanker has gone through the roof, jumping from $20,000 per day to $200,000-$300,000 per day, according to Rystad Energy.

But with storage getting ever closer to capacity, the prices could turn negative again as traders become desperate to offload the commodity. Analysts are betting that this time around its the international benchmark Brent Crude that could collapse. Though Brent has not yet collapsed to the same degree as the WTI, Brent futures for May and June were trading at $13 and $17 respectively on Wednesday. According to market analysts, what happened to WTI is much a possibility for Brent and other commodities.

When will oil prices get back to normal?

The oil market will only get back to normal when lockdowns are over. A phased-out approach to ending lockdowns and resuming economic activity might see prices gradually embarking on an upward trend.

The recently agreed production cut is still significantly lower than needed to ‘balance’ the market, and current demand shocks are too high to be corrected even by a coordinated supply cut. In fact, the truce between Saudi Arabia and Russia came late, as prices had already fallen about 60% from February highs.

The continued fallout will not only affect the industry, but also the countries that rely on oil exports to balance their budgets. 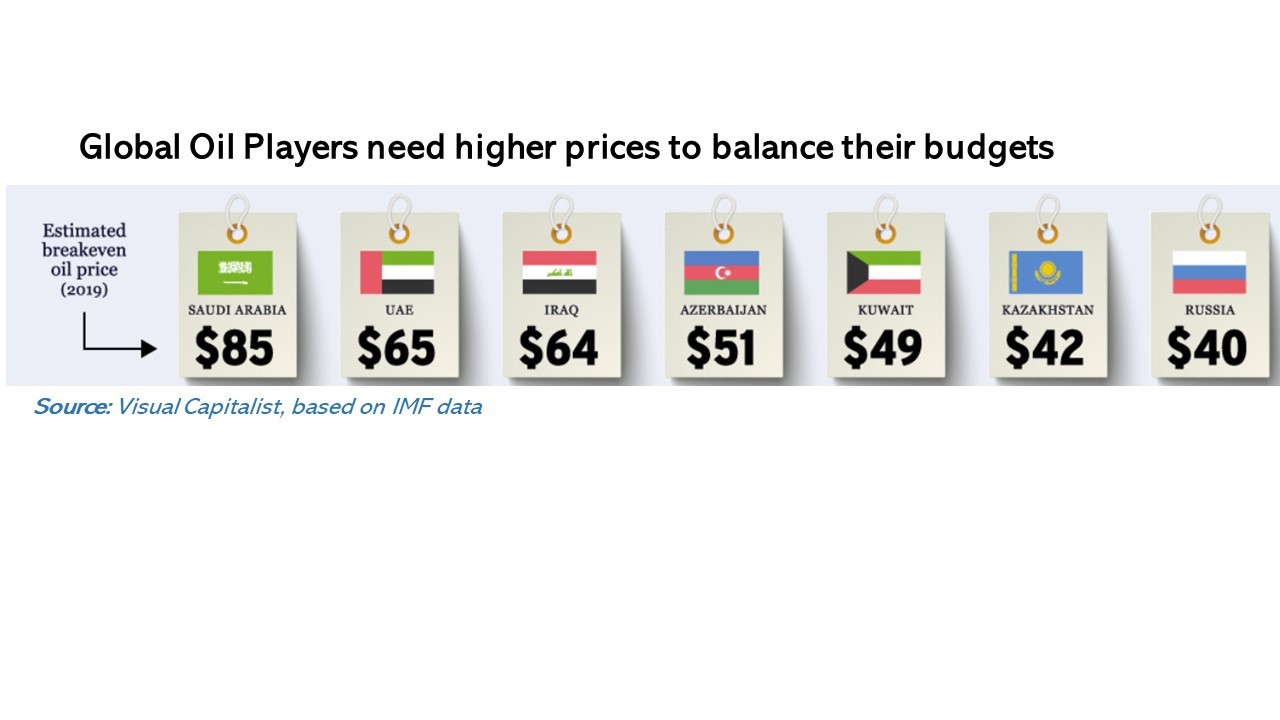 Oil is a geopolitical game, and big price swings always come with a geopolitical undercurrent. For instance, crude prices went up on Wednesday, pausing a weekslong crash after President Trump warned Iran that he has instructed the U.S. Navy to destroy Iranian gunboats if they continue to harass American ships in the Persian Gulf.

Saudi Arabia has also hinted for a second time in two weeks that it was ready to take further measures with OPEC+ to restore oil market stability. On the other hand, Russia is calling for patience and an assessment of the market when the new OPEC+ agreement takes effect on May 1.

Russia prefers that we look at the current market situation with a long-term perspective. Asked whether Russia would consider taking additional measures in light of recent drops, Vladimir Putin’s Press Secretary Dmitry Peskov said on Wednesday, that given the current dynamics, the market “should be assessed as a whole, not by one day and not even by one week, but in a longer-term perspective”, Oil Price reported.

Indeed, the current pressure and volatility on the market will continue until the start of the OPEC+ cuts in May, when production in the countries outside the OPEC+ starts coming off the market in May and when nations start easing lockdowns and economic activity resumes.