In the wake of the current oil price crisis, Tom Kool writes in The Oil Price that “while drillers and oilfield service companies are feeling the pain, the world’s largest oil traders are eyeing huge profits. After all, volatility is a trader’s best friend.” In our view, less demand for oil means less production and consequently a drop in oil prices which could actually help many economies, but traders are braced for mayhem in the markets for now.

The year 2020 started very well for oil, following the last day of 2019 when Brent crude was traded at $66 a barrel. For oil investors, this was by far their biggest annual gain in three years since the OPEC+ alliance was created to regulate global oil production and potential cuts in both OPEC and non-OPEC members.

Though improvements in relations (and negotiations) between China and the U.S. over the trade war was advantageous to oil traders and producers, measures to contain the spread of Coronavirus in China, and now across the globe put a strain on oil prices due to low demands for oil in China. For example, the closure of industries and lockdown of manufacturing cities such as Wuhan in addition to restrictions on international travel.

On Monday the world witnessed the biggest oil price crash since 1992. Brent crude traded at $36 a barrel, the lowest price since 2008.

Less demand for oil means less production and consequently a drop in oil prices which could actually help many economies, but traders are braced for mayhem in markets for now.

The oil and gas sector is arguably a very important sector for the Russian economy. In 2019, seven out of 21 companies listed as the largest public companies in the world were Russian with the vast majority of them in the energy (oil) sector.

For several months, the Russian government has been reluctant to deepen production cuts, although they’ve supported the OPEC+ alliance. In the wake of rising tensions, to contain Russia, Saudi Arabia decided to increase its production capacity to 12.3 million barrels a day starting in April as well as offering steep price cuts to consumers in Europe, Russia’s main market. As a result the Oil Price dropped almost to the level it was years before the OPEC+ alliance was formed, as we can see from the chart below. 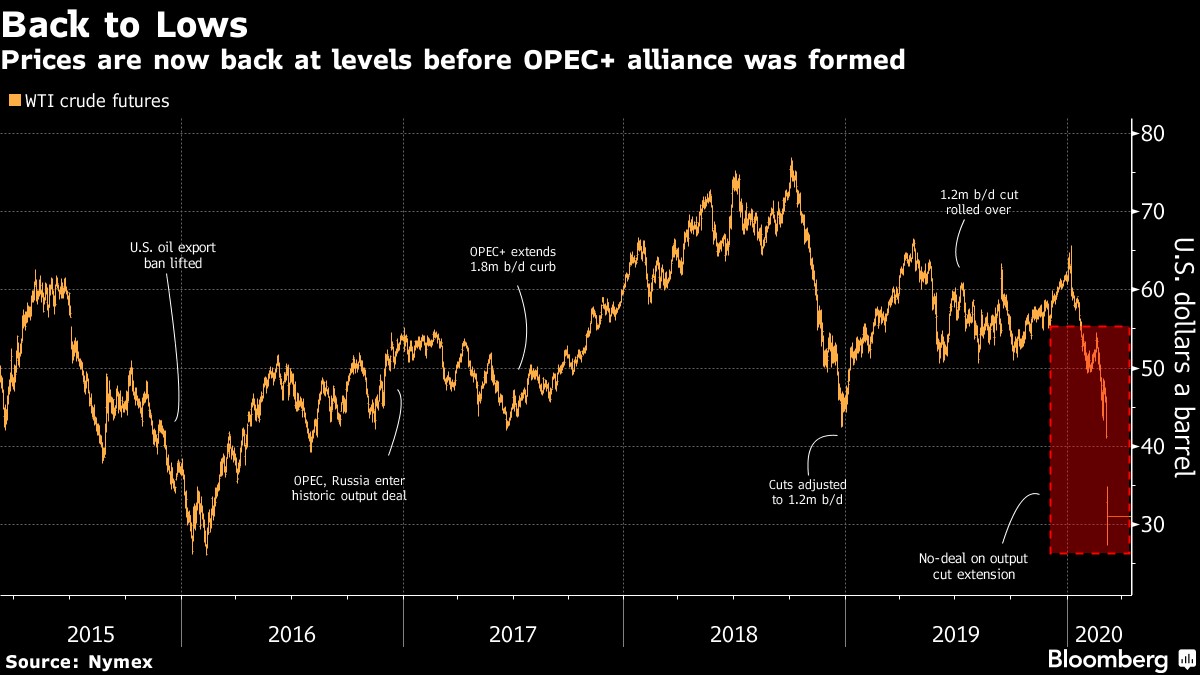 But Russia responded similarly by propping up its production capacity by adding 500,000 barrels to its current production, as they couldn’t see any benefits of reduced cuts to their economy.

The move has led to a Price War in the oil markets. Everything indicates it will affect the U.S. economy more by creating a smaller U.S energy industry as well as knocking the U.S. from its position as the world’s largest oil producer, according to CNBC.

As Tom Kool writes in the Oil Price, “while drillers and oilfield service companies are feeling the pain, the world’s largest oil traders are eyeing huge profits. After all, volatility is a trader’s best friend.”