U.S. stocks couldn’t maintain their positive momentum from the previous week’s rally, as the major U.S. indexes fell around 1% to 4%. For the S&P 500 and the NASDAQ, it was the 11th negative weekly result out of the past 13.

For the week, all three major market indexes posted losses, with the Dow Jones average edging 1.3% lower, the S&P sank 2.2%, and the Nasdaq fell 4.1%.

The sectors that have relatively outperformed this week and generally this year, aside from energy, have been defensive parts of the market: utilities, consumer staples, and health care. These sectors are considered immune to recessions and bear markets, and from this S&P 500 chat from FactSet for the first half of the year, they are seen to outperform all other sectors. 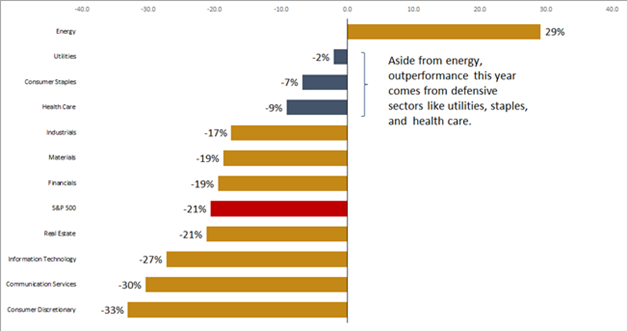 Friday saw an upturn for most stocks, but all major indices recorded weekly losses. On Friday, The S&P 500 rose 1.1% after having been down 0.9% in the early going. The gain snapped a four-day losing streak for the benchmark index, which still posted its fourth losing week in the last five. The Dow Jones Industrial Average rose 1%, while the tech-heavy Nasdaq gained 0.9% after a sell-off in technology stocks eased. Here’s how the major US indices closed the week: 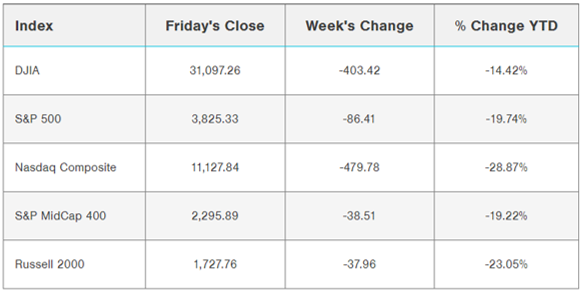 What drove the U.S. market?

Next week, the labor market will be in the spotlight with the Labor Department’s June nonfarm payrolls report due for release on Friday. Other labor market reports, including the Job Openings and Labor Turnover Survey (JOLTS), as well as ADP’s National Employment Report tracking private-sector payroll growth, will provide further insights into the labor market.

International PMI surveys tracking business sentiment throughout the U.K. and eurozone will be released on Tuesday. Meeting minutes for the FOMC’s latest policy meeting, held in mid-June, will become available Wednesday.

It will be a quiet week for corporate earnings, just before second-quarter earnings swing into high gear in mid-July.