Wall Street’s main indexes soared on Friday in a broad rally as signs of slowing economic growth and a recent pullback in commodity prices tempered expectations for the Federal Reserve’s rate-hike plans.

All 11 of the benchmark index’s sectors ended at least 1.5% higher. The S&P 500 rose over 3% for its biggest one-day percentage rise since May 2020, while snapping from a three-week losing streak. 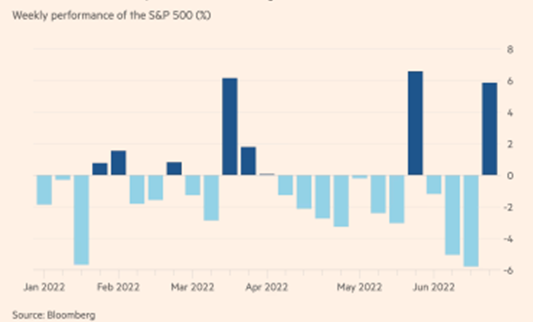 What drove the U.S. market?

The euro edged higher on Friday as a weaker greenback supported the euro but disappointing German Ifo data kept gains in check. German business morale fell more than expected in June but a recession was not yet in sight despite rising energy prices and the threat of gas shortages. The euro climbed 0.24% to 1.0553 against the dollar.

GBP/USD Sterling ticked up against the dollar Friday as a weaker greenback and better-than-expected retail data allowed investors to look past mounting pressure on British Prime Minister Boris Johnson. By 18:46 GMT, the pound rose 0.24% against the dollar at $1.2291. The currency is up 0.59% on the week to the dollar.

USD/JPY The dollar dipped against the Japanese yen on Friday as traders pared back bets on where interest rates may peak and brought forward their outlook on the timing of rate cuts to counter a possible recession.

Next week will feature many important economic indicators for the U.S. and other major economies. Market watchers will receive new updates on the state of the housing market, with the release of May pending home sales and the S&P Case-Shiller Home Price Index tracking home price growth in April.

The final reading for first-quarter GDP growth will be released Wednesday, along with corporate profits and consumer spending data for the first quarter of the year.

The latest updates on unemployment and inflation rates will be released for the eurozone, along with an update on U.K. GDP growth.

On the corporate earnings front, we can expect earnings from Nike on Monday, tracking the quarter ended May. Other companies scheduled to report earnings include Jefferies Financial Group, General Mills, Micron Technology, and Walgreens, among others.