Tech IPO’s propelled SoftBank earnings to the highest ever-ever annual profit for a Japanese company. Softbank invested in a roller coaster of blockbuster initial public offerings of technology companies to achieve full-year net income equivalent to nearly $46 billion. The numbers were driven largely by a gain of nearly $58 billion at the $100 billion Vision Fund and its successor. A series of companies in the fund’s portfolio has gone public, taking advantage of the rising stock market.

SoftBank Group reaped $45.8 billion net income for the fiscal year ended March 31, 2021, the highest of any Japanese company—ever. Its fourth-quarter alone saw $17.7 billion in profit. The annual sum, fueled by a global tech rally, represents a spectacular rebound from its record $8.8 billion loss in the previous year that was compounded by investment hits from the pandemic and holdings in the troubled WeWork.

The Japanese venture capital company’s comeback was remarkable, considering that a while back it was mocked for its overconfidence in WeWork. Softbank’s portfolios include a star-studded roster of global tech startups. The group staged its turnaround via profits from its Vision Fund investment arm, which invests in tech companies and the technology sector was positively impacted by the accelerated adoption of digital services to address the pandemic.

SoftBank’s IPO pipeline is stocked with tech unicorns but matching the past year’s blockbuster results will depend on investors remaining as enthusiastic about tech stocks as they were in the past 12 months.

Softbank’s Vision Fund 1 recently invested in South Korean-based e-commerce firm Coupang, from where it earned roughly $24 billion to its fourth-quarter profit. Coupang debuted on the New York Stock Exchange in March and raised $4.6 billion. SoftBank initially paid $3 billion for a 37% stake. Similarly, DoorDash’s December 2020 NYSE IPO was another jackpot for SoftBank, boosting its profits by an additional $6.07 billion. The company plans to continue capitalizing on the IPO pipeline while it’s hot.

Analysts expect Softbank will continue hunting for and growing disruptive businesses, and then recycling that capital. The IPOs in SoftBank’s pipeline are some of the world’s most anticipated: China’s ByteDance and Didi Chuxing, Singapore’s Grab, Indonesia’s Tokopedia, and India’s Paytm and PolicyBazaar. 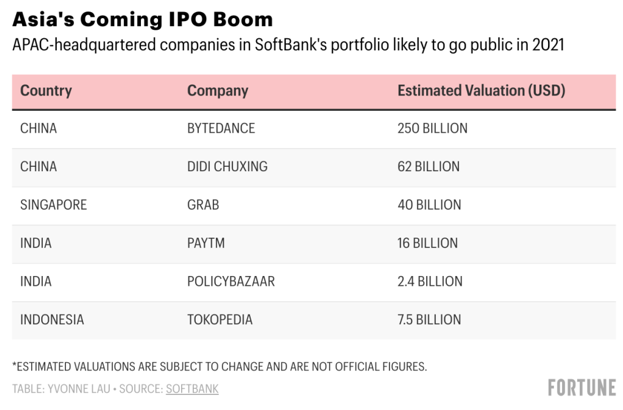 Disruptive companies provide sizable investments with significant value to be unlocked. Softbank has raised its capital commitment in Vision Fund 2 by $20 billion—to a total of $30 billion—indicating bullishness for upcoming investment opportunities.

But even the company acknowledged potential bumps ahead. In a statement released alongside its annual earnings, the company said that “there is no guarantee that the current positive impact will be sustained in light of uncertainties associated with the pandemic.”

Indeed, when the IPO pipeline comes to an end—if and when investors grow fatigued and no longer wait eagerly with checkbooks in hand—SoftBank will need to show that its investee companies’ products are gaining traction with customers and the accountants. A year can be a long time—as we now all know—and that is especially so at SoftBank.”

SoftBank has completed a 2.5 trillion-yen buyback program launched last year which pushed the stock price to two-decade highs in March. The end of the buyback pulls support at a time when shares are sliding in line with weakness in U.S. tech stocks.

Should you buy Softbank shares?

The current consensus among 14 polled investment analysts is to buy stock in SoftBank Group Corp. The 12 analysts offering 12-month price forecasts for SoftBank Group Corp have a median target of 54.06, with a high estimate of 62.87 and a low estimate of 49.06. The median estimate represents a +22.58% increase from the last price of 44.10, according to CNN Business.