Oil prices were expected to drop as a result, but they didn’t. This is because the move was only on paper, and there are doubts whether they’ll achieve the targets. Increasing supply also leaves producers with very little spare capacity, and almost no room to compensate for a major supply outage. Across OPEC+, there are only a few countries that can actually boost their oil production in a palpable way. And their combined spare capacity is not all that great. It is also falling.

Tight spare capacity is likely to keep oil prices volatile and sensitive to any disruptions in output, such as a big hit from a hurricane to Gulf of Mexico production during the Atlantic storm season, or a further fall in exports from sanctions-hit Russia.

The most conservative estimates forecast OPEC’s spare capacity dropping to below 1 million barrels per day (BPD) later this year, representing about 1% of global demand and barely one-twentieth of U.S. demand. Only a handful of OPEC producers, namely Saudi Arabia and the United Arab Emirates, have any meaningful spare capacity.

Consultancy Energy Aspects sees spare capacity within OPEC+ at 1% of global demand of 102 million BPD by year-end, its lowest level since at least 2012 when it began its assessments. This is not a whole lot of oil production that can be tapped within 30 days, per the definition of spare capacity by the U.S. Energy Information Administration. And if an outage happens somewhere in the world, it will become painfully clear exactly how little this is.

According to the EIA however, the situation looks a lot better, with OPEC’s spare capacity at around 3 million BPD right now. 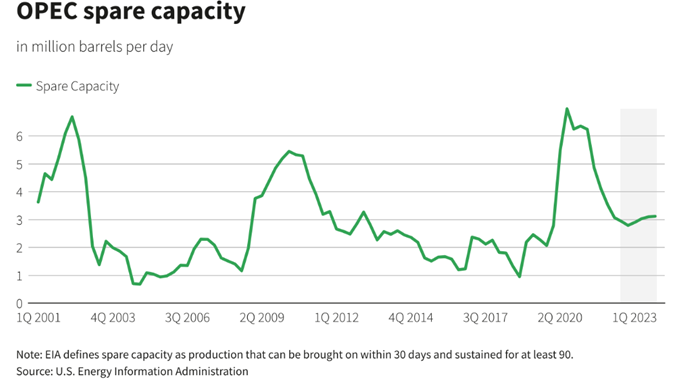 What a tight spare capacity means

With so little spare capacity, the risk of Libya going offline or a major hurricane-induced disruption in the Gulf of Mexico has oil markets worried. Given that Libya “goes down” on average once a quarter and sometimes for an extended period of time and given that hurricane season is beginning in the Gulf of Mexico, the picture becomes even grimmer.

In previous years, hurricane season has taken offline the bulk of U.S. offshore oil production, which in turn accounts for 15 percent of total U.S. oil production. The bullish factors for oil seem to be just piling up.

According to Reuters, Barclays bank raised its forecast for Brent crude by $11 per barrel for this year and by $23 per barrel for next year, noting that “Saudi Arabia will be producing (about) 11 million BPD by the end of summer, and real spare capacity globally which can be brought online fairly quickly will be standing at just 1.5% of global demand.” If this happens, Saudi will be near its spare capacity limit: it has never produced 11 million BPD for an extended period of time.

In fact, according to other forecasts, OPEC+ will go nowhere near its new target: JP Morgan sees actual output additions at 160,000 BPD in July and 170,000 BPD in August. Leaving geopolitics aside, although geopolitical considerations have a big part to play in OPEC+’s policies, there is simply not enough spare production capacity to make that production boost work.

Oil stocks have performed well since their lows in 2020, seeing up to a 1000% rise to date. With continued sanctions on Russian oil and the shrinking spare capacity of other oil-producing countries, the price of crude stocks is expected to be highly volatile. However, in the long term, Oil stocks are forecasted to be highly profitable.