Gold investments in times of crisis

During the last week of February, stocks had their worst fate since the financial crisis in 2008 thanks to COVID-19, whose impacts have so far dimmed the outlook of the global economy for 2020.

Not spared from this fate was gold, long considered to be a safe haven in times of crisis such as this. While nearly all sectors of global finance have been widely affected, the gold price crash surprised many.

Gold has long been considered a safe haven since its value can often remain the same or increase during times of political instability, geopolitical tensions and other factors that affect the global economy. In fact, gold was one of the highest growing investments in 2019.

According to Bloomberg, since the outbreak of the Coronavirus, returns on global commodities have already been at their lowest since 1987. To the surprise of many, the gold price crashed on the last trading day (Friday) in February, posting its biggest single-day slide since 2013. Amongst others, the fall in prices is attributed to fears that COVID-19 could diminish demands for raw materials in case of a global economic crash.

“Gold gapped down at the open on the Comex market in New York and kept declining hitting a day low of $1,564.00 an ounce in afternoon trade, down $78 an ounce or 4.8% compared to Thursday’s close. By the close the metal had recovered some losses, climbing back above $1,580.” 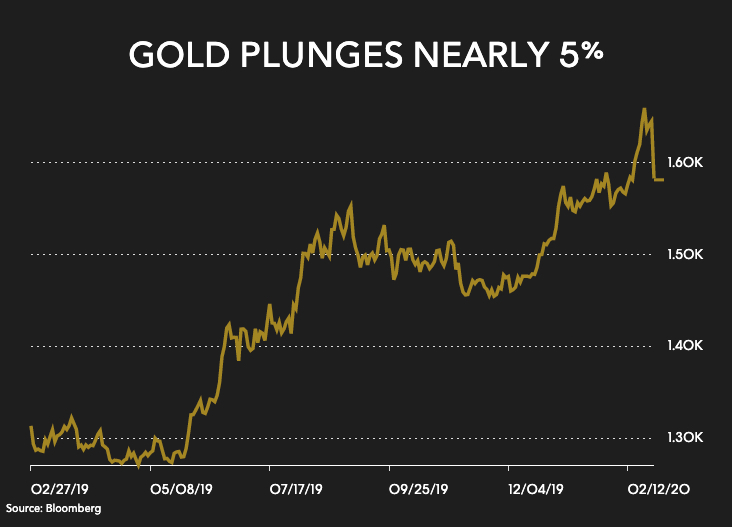 While the US-China trade war brought the American manufacturing sector to a 10-year low, the uncertainty in the global market resulting from the trade war presented an excellent opportunity for the gold price increase, providing lucrative opportunities for investors.

It appears gold’s “safe haven” status tends to be a victim during times of crisis as we can see from what happened in the 2008 financial crisis when the price of gold fell about 25% of its value. During the 2008 financial crisis, gold was used as a cushion for the depreciation of assets. However, this effect caused a forced sale of gold across the market, which in turn decreased its value.

The poor performance of gold in times of a financial crisis is further caused by the pressure it gets from the market to sell in order to balance the monetary policy and interest rates.

But overall, historical data shows gold remains bullish, and as long as the global inflation remains controlled it can still be considered a safe haven.

Whether an investor buys or sells gold assets during the current crisis will depend on how they view or perceive the current market outlook. COVID-19 is likely to spread to the entire world as cases have been reported in all continents, including the United States.

Central banks across the world are contemplating various responses. In the U.S, the Federal Reserve Bank announced an emergency rate cut of 0.5%. The last time the Fed made a similar decision was during the financial crisis in 2008.