Deliveroo shares rallied this week as retail investors unconditionally traded the stock for the first time. Deliveroo became the biggest firm to raise capital at the London Bourse in almost a decade, but the stock has struggled since its tragic IPO in London last week, which saw it fall 30% on listing.

Deliveroo became the biggest firm to raise capital at the London Bourse in almost a decade. But it flopped. The stock rose 3.16% to 288.86 pence in early morning London trading on Wednesday as unconditional trading in the stock began.

That was below the 390 pence a share at which it launched its IPO last week, which valued the Amazon-backed company at £7.6 billion.

London has seen a substantial drought of IPOs in the past few years, as many companies avoided the London Stock Exchange (LSE) partly because of Brexit issues. Deliveroo’s stock market debut was meant to be a victory for the LSE, which has been trying to attract tech listings post-Brexit to compete with rival exchanges in the U.S. and other European financial centers including Amsterdam and Frankfurt.

Deliveroo share price has been in consolidation after it tragic IPO last week. As a result, the average true range (ATR) has declined, and the price is at the same level as the moving averages. This dip likely presents a good time to buy the stock. Low volatility tends to be a signal of a calm before the storm. This means that the stock could soon rally as more buyers start coming in. 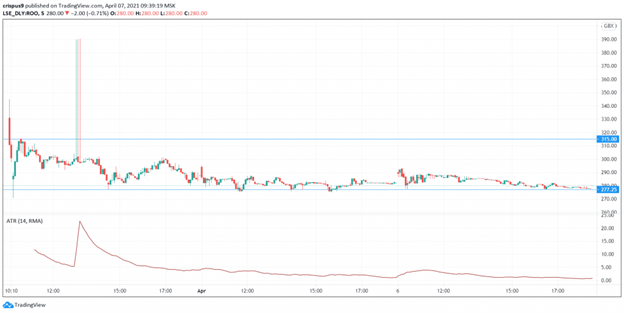 Despite a surge in takeout orders during COVID-19 pandemic lockdowns in the U.K. and Europe, several big investors refused to buy into the IPO, citing concerns about the company’s structure, workers’ rights and regulatory risk.

Those who were willing to buy shared voiced doubts over the company’s high valuation and governance structure, which gave founder William Shu continued control of the business even after floating.

But the stock got a boost on Tuesday when Goldman Sachs, one of the main banks behind the listing, bought £75m of Deliveroo stock last week to try and prop up the IPO price. The buying accounted for a quarter of all the stock traded in the first two days after listing.

The banks working on the float have blamed short selling for Deliveroo’s poor performance. The Financial Conduct Authority (FCA)’s daily register of short disclosures so far shows no open short positions against the company.