August was yet another tough month for the crypto market, as the world’s most valuably and expensive crypto, Bitcoin, fell from $23,400 to $19,990 in price. The digital currency’s market capitalization plunged 12% in this period, falling from $444.6bn to $389bn.

The rising interest rates continue to weigh in on stock markets as well as cryptocurrency markets. Higher interest rates make borrowing money more expensive, which can lead to lower profits for companies that have taken out loans to finance their operations.

There were positive takes in the month too for the crypto sector. In terms of adoption, Australia continues its trend of being a world leader in the mainstream adoption of blockchain technology on which Bitcoin is based. The Australian Treasury department announced a Token Mapping exercise while the Reserve Bank of Australia announced plans to launch a limited-scale Central Bank Digital Currency (CBDC) pilot program. Australia has also been ranked #1 on a global index for its interest in crypto.

Below are highlights of what happened in the crypto markets in August.

Crypto markets saw yet another month of losses, as bitcoin fell from $23,400 to $19,990 in price, while its market-cap plunged 12% in this period, falling from $444.6bn to $389bn. The world’s most valuable cryptocurrency also ranked second in terms of trading volume, with Tether, the world’s most used stablecoin, hitting $1.54trn in monthly trading volume, 40% more than the second-ranked Bitcoin. With $1.1trn in monthly trading volume, Bitcoin ranked as the second most-traded crypto for the month. Tether saw a growth in its market cap from $66.2bn to $67.5bn in 30 days.

BNB witnessed a price and market cap rise in the month of August, the only cryptocurrency to experience this in the month. BNB’s price rose from $285 to $288, driving its market cap from $45.9bn to $46.4bn.

Ethereum ranked third in terms of monthly trading volumes, as the largest altcoin trading volumes hit nearly $710bn for the month. The cryptocurrency, however, also saw a slump in price, falling from $1,666 to $1,580 for the month. Ethereum’s market capitalization also dropped from $201.3bn to $193.9bn in this period. 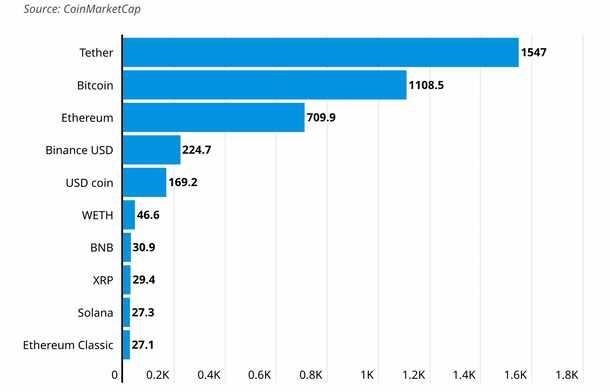 The rise in interest rates by the US Federal Reserve and other global central banks over the last few months has had a ripple effect on stock markets around the world as well as crypto markets. Higher interest rates lower a company’s profits and consequently, its valuation drops. Raised interest rates have also been found to affect the price of cryptocurrencies alongside socks, leading analysts to believe there is a correlation between the fed monetary policies and the price of cryptocurrencies, mainly bitcoin.

As more institutional investors get into the space, there has been a growing push for more regulation of the cryptocurrency market. While some fear innovation may be stifled by enhanced regulations, others feel it is necessary for the protection of investors. For example in August, a sanction was placed against crypto-mixing service, Tornado Cash, in the US recently. The service was banned as a matter of national security as hackers had allegedly used the service to launder stolen funds. On one hand, these sanctions will make it harder for bad actors around the globe to operate. However, on the other hand, the new sanctions mean anyone who comes into contact with that money could be penalized, which could make it incredibly challenging for validators on staking networks who may get paid with funds associated with Tornado Cash.

Australia continues its trend of being a world leader in the mainstream adoption of blockchain technology on which Bitcoin is based. The Australian Treasury department announced a Token Mapping exercise. The exercise is expected to help create a clearer picture of the blockchain ecosystem in Australia.

The Reserve Bank of Australia announced plans to launch a limited-scale Central Bank Digital Currency (CBDC) pilot program. This program will explore the use cases and potential economic benefits of CBDCs in the country. Australia has also been ranked #1 on a global index for its interest in crypto.

Elsewhere in the US, Blackrock, the world’s largest asset manager, announced it will join competitor Grayscale in adding a bitcoin trust offering for US institutional clients. The entry of such a major player into the space is a bullish sign for the future of cryptocurrency.