China’s growth impact due to Coronavirus

China’s economic growth could fall to as low as 3.5% in the first quarter of 2020 if the spread of the new coronavirus is not contained fast, according to Morgan Stanley.

The virus has disrupted manufacturing supply chains and if production does not resume quickly to normal levels, it spells doom for the Chinese economy. Major cities such as Wuhan, the epicenter of the virus, remain shut down in a bid to contain its spread.

Though factories have started to resume operations, Morgan Stanley analysts found that production had only reached 30% to 50% of normal levels as of last week. China is the world’s second-largest economy and home to major parts of the global supply networks, producing goods from textiles to mobile phones and cars. A prolonged shutdown of production lines in China does not only affect the Chinese manufacturing sector and economy but also hurts other markets’ ability to produce their goods.

Morgan Stanley analysts expect manufacturing production in China to reach 60% to 80 % of the normal (pre-virus) levels by the end of February 2020 and be back to normal by mid to late March.

Though a high level of uncertainty remains, the analysts observed that the spillover to global growth is only for the short term, and expect that “once the effects of the disruption fade, the global economy will receive a bounce as companies move to resume production and that it would receive a boost as inventory levels are rebuilt to normal levels after the drawdown during the disruption.”

Below is a forecast of the impact of the virus on China’s growth depending on how quickly industrial production can resume (source: Morgan Stanley, CNBC) 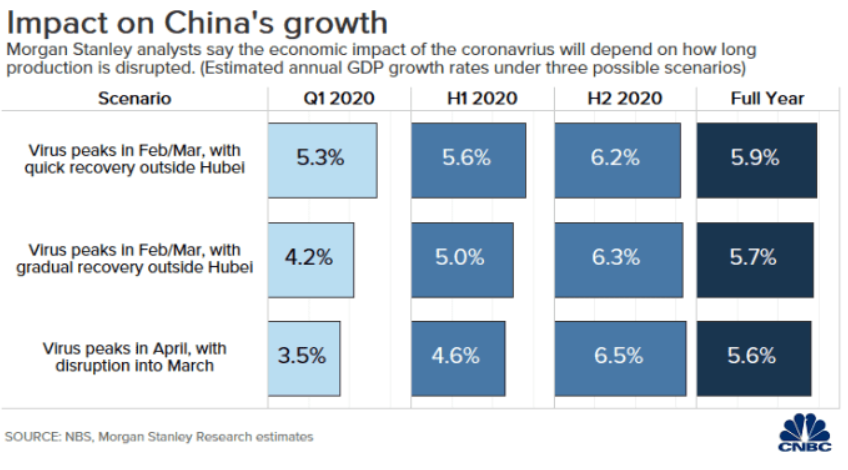