If you haven’t invested in Sea Ltd, at least in 2020, you’ve missed up on some multi-bagger gains. This relatively unknown Singapore-based company has returned more than 500% since its IPO in 2017. In the last 18 months alone, the stock has risen 880%, and the company has emerged as a regional powerhouse that could rival Alibaba or Tencent. Sea Limited’s stock recently hit an all-time high after it posted its second-quarter earnings. But who are they, and why could they be an important asset in your portfolio?

The NYSE listed company derives its name from the geographical location in which it operates: the seven markets of Southeast Asia and Taiwan. Its mission is “…to better the lives of the consumers and small businesses in our region with technology.” Sea Ltd operates through several divisions, Garena in digital entertainment, Shopee in e-commerce, and SeaMoney in digital financial services and is a market leader in the territory. Sea Ltd is backed by Chinese giant Tencent which owns a considerable stake.

Sea Ltd’s revenue increased by 57.9% year-over-year to $914 million for Q1 of 2020. However, it is still unprofitable, reporting an adjusted loss of $239 million. Adjusted revenue rose 93% annually to $1.29 billion during the second quarter versus $665.4 in the same quarter last year, beating estimates by $230 million. It posted a positive adjusted EBITDA of $7.7 million, compared to a loss of $11 million a year ago and analysts’ expectations for a loss of $41.9 million. 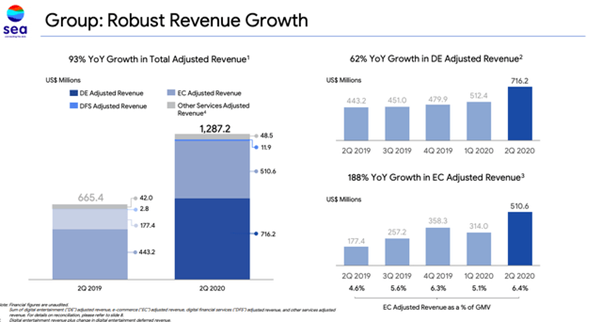 Sea Ltd’s divisions have a limited operating history with the SeaMoney and Shopee platforms launching in 2014 and 2015 respectively but have grown substantially.

Shopee is the leading e-commerce solution in Southeast Asia by gross merchandise volume with the closest competitor being Alibaba’s Lazada. Gross merchandise volume grew by 74.3% in Q1 to $6.2 billion and was accelerated by COVID-19. The number of buyers and sellers increasing on the platform strengthens the network effect and makes it an obvious choice for shoppers in the region. The platform is holding the line against Alibaba and Lazada, through aggressive promotions and subsidies (including free shipping and financial support for sellers), which have led to it being unprofitable.

The company’s ability to successfully expand into e-commerce over the long term is a major encouragement to invest in the company. This is a huge opportunity going forward, and the numbers for the second quarter are validating this thesis. Shopee registered accelerating growth during the second quarter, gross orders increased by 150% year over year to reach 615.9 million. Adjusted e-commerce and other services (including digital payments) revenue rose 188% annually to $510.6 million during the second quarter, but its adjusted EBITDA loss widened from $248.3 million to $305.5 million. However, its adjusted EBITDA loss per order declined annually from $1.01 to $0.50, indicating it’s dialing back its promotions and subsidies as it locks more shoppers into its platform. As a result, its adjusted revenue as a percentage of its total gross merchandise volume (GMV) rose from 4.6% to 6.4%. 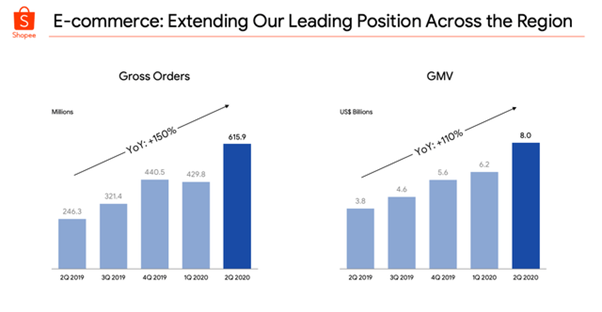 Unlike, other larger Asian tech companies, like Alibaba and Tencent, which are often exposed to macro headwinds such as escalating tensions between the U.S. and China, Sea Ltd’s Singapore-base makes it largely immune to East-West geopolitical tensions.

Like Amazon, Sea’s e-commerce and gaming businesses both gained momentum throughout the COVID-19 crisis. Social distancing measures and shutdowns boosted Shopee’s online sales, and people played more games as they stayed at home.

Similar to Amazon and Shopify and other e-commerce platforms, Sea Ltd developed and integrated a payment system - SeaMoney - with its e-commerce business. The company operates in a region where many don’t have credit cards, and credit card payments are falling behind e-payments, and SeaMoney has emerged as a leading digital payments and financial services provider in Southeast Asia.

SeaMoney services and products are offered under AirPay, ShopeePay, ShopeePayLater, and other brands in the region. Total payment volume crossed the $1 billion mark for the first time, roughly a year after integrating it with the Shopee platform. Total paying users amounted to 10 million people in the last quarter. The payment platform that considers the financial context in which the company operates will likely support the adoption of its e-commerce and other platforms.

Unlike, its e-commerce platform that is still unprofitable due to aggressive marketing and promotion subsidies, Sea Limited’s gaming platform Garena has been profitable. Garena offers licensed games from Tencent, as well as first-party games.

Garena has seen exponential growth which has offset Shopee’s losses. Garena has rapidly emerged as the region’s largest digital entertainment company by revenue, increasing 30% year-over-year to $512.4 million. The digital entertainment segment makes up over half of Sea Ltd revenue with its game “Free Fire” hitting 80 million daily active users. “Free Fire” was the highest-grossing mobile game in Latin America and Southeast Asia for Q1 2020. During the second quarter, the digital entertainment group grew its adjusted revenue 62% annually to $716.2 million, as its adjusted EBITDA rose 65% to $436.2 million.

Sea LTD has a market valuation of around $63.5 billion, which is still quite reasonable considering the size of the long-term opportunity in Southeast Asia. Internet penetration is still growing in Southeast Asia and the business is also delivering accelerating growth, somehow at pace with internet penetration. The company is performing well across the board, and management said that momentum remains strong in the third quarter. The company is run by Chairman and CEO Forest Li, who owns a considerable stake in the business, meaning that his interests are aligned with that of shareholders.

In terms of competition, the company seems to be outgrowing its e-commerce competitors - mainly Alibaba’s Lazada - which is a massive growth driver going forward.

Is it too late to buy Sea Limited’s stock?

At USD 150,56 (as of 20 August 2020), shares of Sea Limited are trading at a forward price to sales ratio around 10.3 times revenue estimates for 2021. There is a good chance that revenue estimates will be increased in the near term, which could push down the price to sales ratio to some degree. However, the company’s valuation reflects its strong growth expectations. Over the next year or so, returns for investors will depend on how revenue, earnings, and valuation evolve.

Nonetheless, the long-term thesis is that Sea Limited looks stronger than ever, and any pullbacks down the road could present a buying opportunity for investors. Though the stock is priced for aggressive growth expectations, analysts maintain that it’s not necessarily overvalued. The market opportunity in Southeast Asia should be particularly encouraging for investors. It’s really not too late to accumulate some shares of this emerging Southeast Asian giant.

Thinking of investing in Sea Ltd and other growth stocks?

Investors Europe provides a wide selection of online trading platforms. Our execution-only multi-asset broker status allows our clients to place orders straight to the market in all asset classes, thus eliminating any conflict of interest. The platforms are highly customizable for desktop, web, and mobile devices, integrating major platforms such as Bloomberg EMSX, Fidessa, CQG, and many more.

Contact us today to find out which options we can offer to you at +230 54490369 or trading@investorseurope.com.