Pound & Euro advance as dollar weakens, stocks rise on hopes of Brexit deal The British pound and the Euro rose to their highest levels in over two years amid optimism that the U.K and the European Union may reach a trade deal this week. The US dollar weakened, as stocks rose on both Wednesday and Thursday.

The pound has seen twists and turns of the Brexit trade negotiations as the year-end deadline for the U.K. and the EU to reach an agreement nears. Negotiators have less than three weeks left to strike a deal, and optimism is building again that the two sides are close to reaching a last-minute accord.

Talks were extended past a Sunday deadline in hopes of reaching a deal by the end of the month. Brexiteers are being told that the U.K. has negotiated a joint dispute mechanism, heading off unilateral action by the EU if the U.K. strays from EU standards in the future, BBC political editor Nicholas Watt said in a tweet.

How did major currencies react?

Sterling gained as much as 0.7% to $1.3554 on Wednesday, surpassing a high recorded on Dec. 4 to reach its strongest level since May 2018. The Euro briefly rose above $1.22 for the first time since April 2018, boosted by stronger-than-expected economic data, which added to optimism the region’s recovery is gaining traction.

Meanwhile, the dollar declined with the Bloomberg’s gauge of the greenback falling for the third day, the longest run in about two weeks, as risk sentiment improved and investors positioned for the Federal Reserve’s policy decision later on Wednesday. 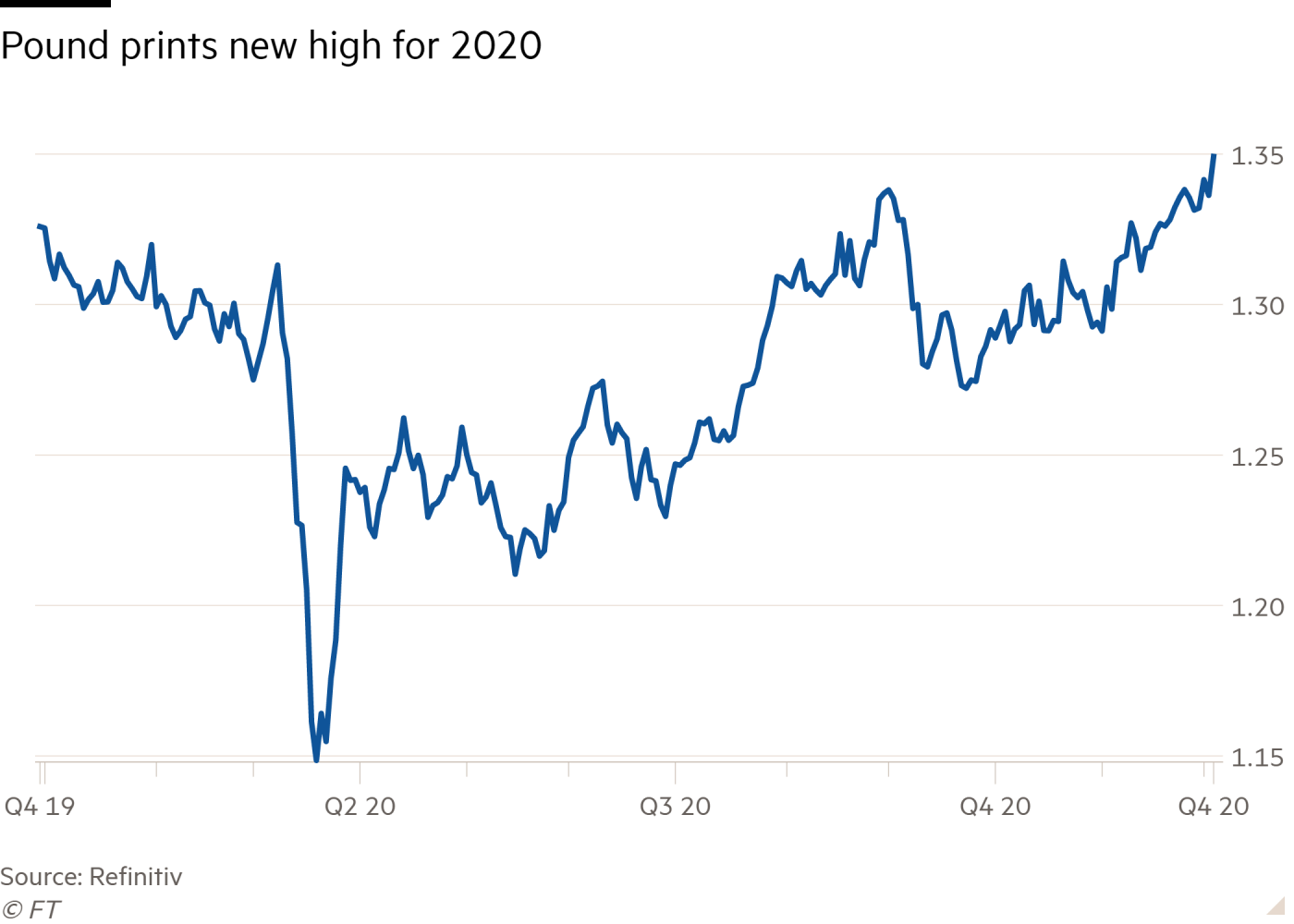 The US dollar was broadly lower across the board before the Federal Open Market Committee meeting.

British government bonds fell amid the market’s increased appetite for risk, with the yield on 10-year gilts rising as much as five basis points to 0.31% – the highest in a week. Meanwhile, money markets erased bets that the Bank of England will cut rates to 0% to support the economy, after wagering that such a move could happen as early as May 2021 last week.

The common currency is being bolstered by expectations that the monetary union will achieve greater fiscal integration, with the bloc implementing a landmark recovery fund aimed at steering the region’s rebound from the coronavirus crisis.

How did stocks move?

European stocks closed higher on Wednesday, with the pan-European Stoxx 600 up about 0.8%, with almost all sectors in positive territory. Insurance shares led the gains, climbing 2.1%. iShares MSCI United Kingdom ETF gained 1.2% while U.K.-based banks Barclays and Lloyds Banking climbed 3.3% and 1.3% on the news.

European stocks continued to trade in positive territory on Thursday as traders reacted to comments from the U.S. Federal Reserve that it will continue to support the economy.

Business activity in the eurozone is having a fairly robust December, according to the latest preliminary purchasing manager’s index (PMI) data for the region.

The flash eurozone PMI composite output reading, which looks at activity in both manufacturing and services sectors, came in at 49.8 in December, up from 45.3 in November and beating expectations. A reading below 50 still indicates a contraction in business activity, however.